Game of Thrones Giveaway – Get Involved!

The wait is nearly over, the fourth season of Game of Thrones is coming on the 7th April 2014 and we’ve heard that season 4 is going to be grander than ever with 10 action packed episodes!

To mark such a special occasion We Buy Games has decided to give away a special Game of Thrones prize on our Facebook and Twitter pages. 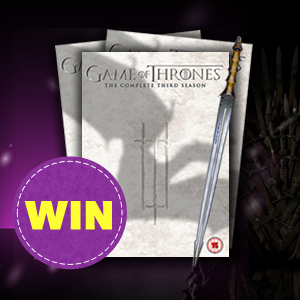 Released on the 17th of February 2014 the third instalment in the franchise does not disappoint, with families at war, danger around every corner and the constant worry that your favourite character will be taken from you in unimaginably cruel fashion. Game of Thrones season 3 has everything to keep you on the edge of your seat during the full 10 episodes and will leave you praying to the old gods and the new that it will never end. Season 3 also features one of the most talked about TV moments ever, the red wedding!

How You Can Enter

Complete an offer on We Buy Games during 24th March and 14th April and you will be automatically entered into the competition. Earn some extra cash selling games, CDs, DVDs and books and have the chance to win a prize!

If you do both you will be entered into the competition twice doubling your chances of winning.

We Buy Games like the Lannisters always pay their debts! On 15th April we will announce the lucky winner on our social pages and get your prize sent straight to your front door.

The competition closes on 14th April.

This isn’t just a giveaway we will be having Game of Thrones discussions, quizzes and of course all of your favourite Game of Thrones memes! So if this sounds like fun, which it definitely does come and join us!

If April 7th feels like years away satisfy your boredom and your wallet at We Buy Games Start Selling Games, DVDs, CDs and Books Today.

Watch the teaser trailer below: